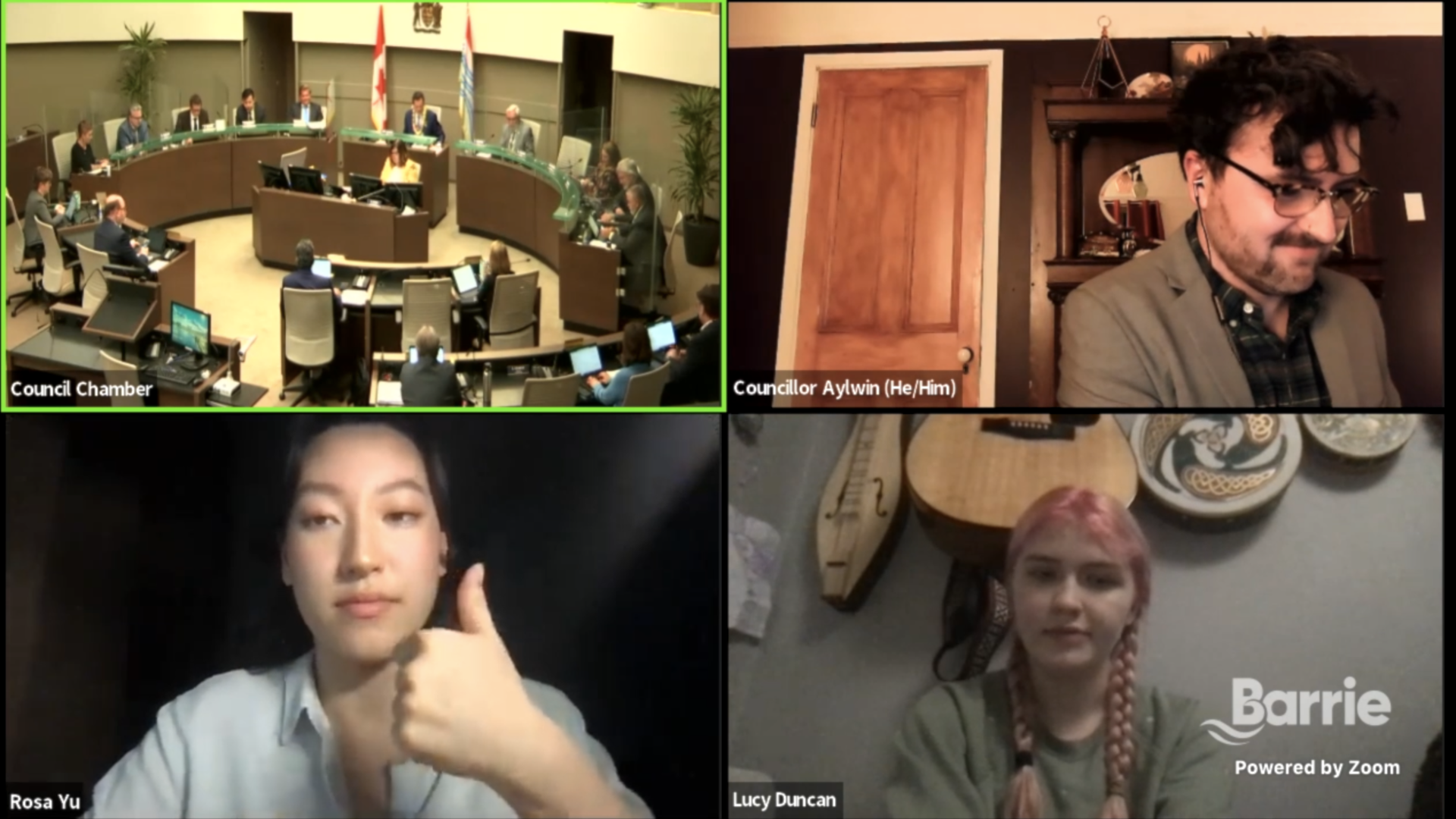 “The City of Barrie declared a climate emergency in 2019. But almost three years later, we have yet to see concrete action taken, we no longer have time to make excuses to avoid action,” Lucy Duncan, a 10th grader and one of the organizers said. “In Canada, municipalities have influence over around 50% of all greenhouse gas emissions, which is why we need to take action locally here in Barrie.”

Duncan was joined by a 17 year old 11th grader Rosa Yu. “We are pleased to see how some of our ideas were highlighted in this plan. For example, the active transportation section which is a resolution for making roads more accessible to non car users, and making public transit more accessible and affordable for daily use definitely incorporates our ideas. The Circular Economy section in the draft also aligns with our support of a sustainable economy based on reuse and recycle.”

In conclusion, Duncan said that “the next step for the city is to ensure that this plan is passed and that definitive action is taken to ensure that its contents become reality.” While Yu implored “the council to keep the youth of Barrie in mind as decisions surrounding this plan are finalized.”

Adam McMullin, Barrie’s manager of energy management, presented the proposed immediate actions and next steps to achieve the emission reduction target of “net zero emissions for the community by 2050 and 45% reduction from the 2018 baseline.”

At the administrative level, the city will establish action tables and investigate the establishment of a carbon budget. The city has also planned big move actions such as deep energy retrofit program and green development standard.

“This plan is ambitious with its targets. And as we heard from Rosa and Lucy, we have to take action right away,” McMullin said.

The plan was passed unanimously by the council.

Barrie residents can park their cars without any charge at designed waterfront parking lots.

Deputy Mayor Barrie Ward’s motion, passed unanimously, will have “the Traffic and Parking Services Department investigate ways to prevent long term parking by nearby residents and waterfront lots and streets,

In support of bringing the motion Ward said “we see a lot of the development taking place around the waterfront, a lot of the residential development and a hotel development, that people will start using that to park their cars. And that’s not what waterfront park is intended to be. It’s intended to be for people of Barrie who want to go down there, enjoy it for the day, maybe people from downtown want to enjoy lunch.”

Barrie is running a pilot needle collection program to ensure safe disposal of used needles. Councillor Natalie Harris wants the city to explore “different types of needle kiosks that would prevent just garbage collection from going into them.”

In support of the amendment and the program, Councillor Keenan Aylwin said “it’s a way to save lives. It’s a way to reduce discouraged needles.” Mayor Jeff Lehman echoed Aylwin’s points by adding that kiosks “have now saved lives, and the more we can get them out and get the training out, the more we have the potential to save a life.”

Councillor Jim Harris brought forward a motion from an idea proposed to him and Mayor Lehman by a Barrie youth Will Yang for a youth council. The youth council will have a mandate of providing feedback on social, environmental, and municipal issues that affect youth in Barrie.

It was also passed unanimously.