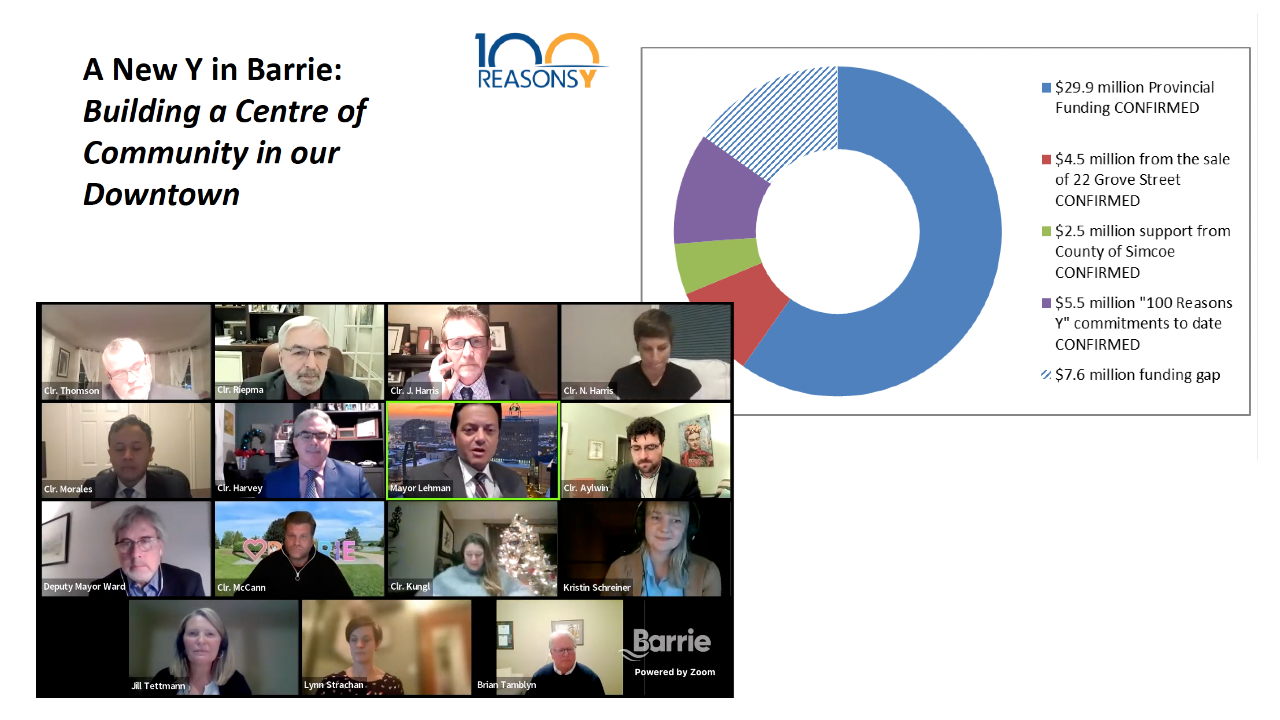 YMCA is asking the city of Barrie for $2.5 dollars to build a new centre. It is already getting $2.5 million from Simcoe County and part of that is funded by Barrie taxpayers. Even if the council decides to give the requested amount, there will be a funding gap of more than $5 million.

The YMCA team made a presentation to the council last week about the proposed centre which is still in the design phase.

“The YMCA of Simcoe Muskoka is committed to building a new kind of Y to serve the people in Barrie,” said Lynn Strachan, a former city councillor and chair of the YMCA of Simcoe/Muskoka Board. The new centre will have a licensed childcare centre along with health, fitness and aquatic facilities. Jill Tettmann, the president and CEO, YMCA of Simcoe/Muskoka told council that other services include “immigrants services, and supports for youth at risk.”

There was a lot of excitement from the council about the proposed project but also questions and suggestions about funding, building design, operations and employment.

Ann-Marie Kungl, the councillor for Ward 3, asked how YMCA plans to raise the remaining $5 million if the council decides to give requested $2.5 million.

“We do have a plan to continue to raise funds from the community, and we also have an opportunity to borrow some funds if needed,” said Strachan.

Co-chair of the capital campaign for YMCA Brian Tamblyn said that he was optimistic about raising the remaining amount. “I don’t think we’ve had anybody say no to us yet.”

Jim Harris, the Ward 8 councillor, was also concerned about the funding gap.

The Ward 1 Councillor Clare Riepma, who is an urban planner and engineer, asked how the new building will interact with the nearby streets.

Kristin Schreiner, the building designer for MartinSimmons Architects working on the project, said the design is done considering the various services offered by YMCA. “Especially in the winter months, you would also have a physical connection between the why and the childcare. So the children can actually make use of the gym facility,” she said about one of the design decisions.

The Ward 9 Councillor Sergio Morales asked how YMCA is building for tomorrow and not yesterday. He said the valuable downtown plot can be used to build community housing also. Schreiner talked about the building material choices that can make future expansion possible.

At the end Mayor Lehman made positive comments about the proposed plans, especially the potential synergy between YMCA and Barrie Public Library.

The Ward 5 Councillor Robert Thomson talked about his concerns about the size of requested funding. “It’s exciting, and it’s a great building. I’m a little bit nervous about the ask.”