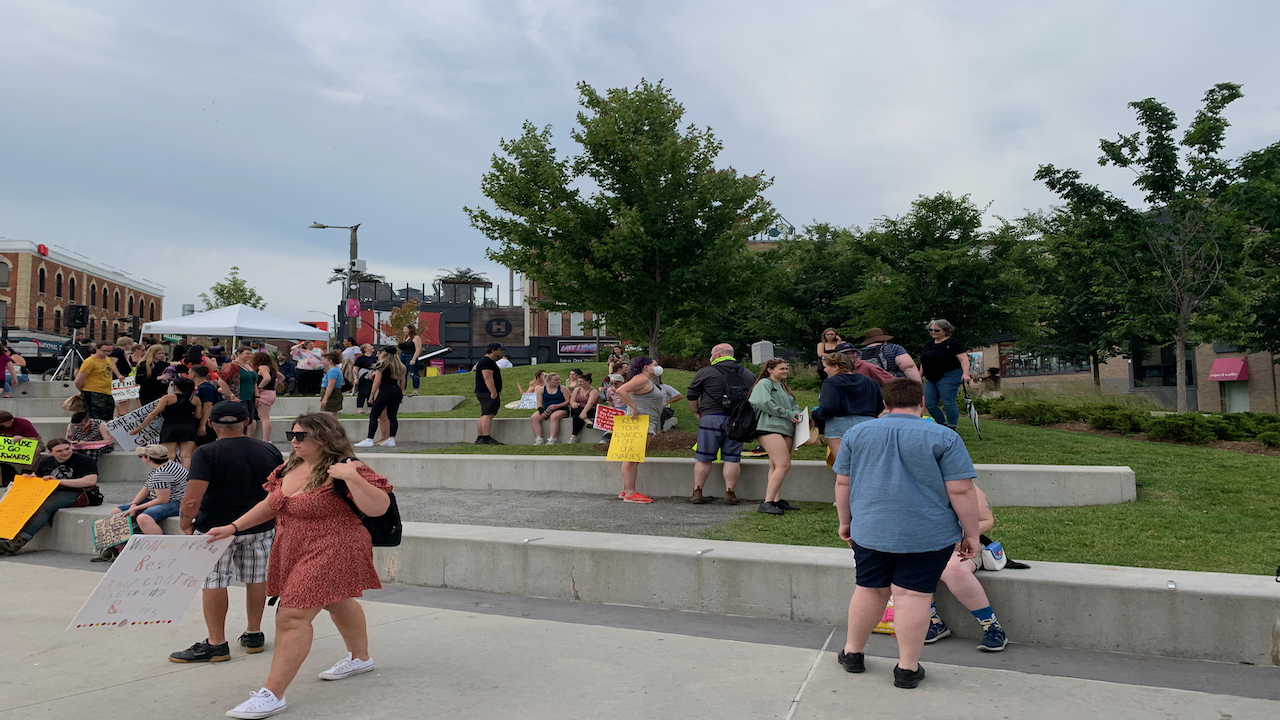 With chanting of “he he ho ho, we are here to fight for Roe” and honking of passing vehicles, a rally in solidarity with American women’s right to legal and safe abortion took place in Barrie on June 30. Taylor Rice was the organizer of the rally that began at Town Hall on Collier st and ended at Meridian Place on Simcoe street, followed by speeches.

People from various organizations condemned the decision of the US supreme court to overturn the 1973 landmark ruling affirming that the Constitution conferred the right to have an abortion.

“I’m here today to stand in solidarity with American women and people with a uterus,” said Shelby, who works in the healthcare industry. She said an attack on women’s rights anywhere is a war on all people everywhere. Tying an abortion to women’s rights and healthcare she said “if you were able to say, I don’t know anyone who had an abortion, what you’re really saying is no one trusts me enough to ever told me that they’ve had an abortion.”

Shelby said she did not want her “daughter to grow up in a world with less human rights than her own mother and grandmother had.” She said Canadian women can also see their abotion rights being taken away as “88 out of 119 conservative members of parliament in Canada being anti choice and anti abortion.”

Deseret, a crisis counselor with La Maison Rosewood Shelter, held patriarchy and colonialism responsible for loss of abortion rights in the US. “Our work within social services and the fight for reproductive rights and justice involves deconstructing and decolonizing harmful and oppressive hierarchies and paradigms.”

“1973 Roe vs. Wade decision was a moment for celebration and triumph for activists and women,” said Paley. Its overturning “represents a fundamental erosion of human rights based in colonialism, patriarchy, white supremacy and misogyny.” She called for safeguarding these rights in Canada.

Christian, a non binary and trans person and the chair Simco Pride, talked about the history of abortion rights in Canada.

Canada gave women rights to abortion much later than the US. In 1969, Canadian women first had the right to abotion, but only if a committee of doctors decided that continuing the pregnancy would affect women’s life or health. In 1988, it was struck down by the Supreme Court of Canada as unconstitutional in R vs. Morgentaler.

They said as late as 2014, New Brunswick removed the requirement set in 1969 that required abortion be performed in a hospital facitily only. “We need to provide greater access to reproductive health care. And we need to increase support for parents. This means access to affordable housing. Access to affordable cost of living, including food and childcare, and many more things.”