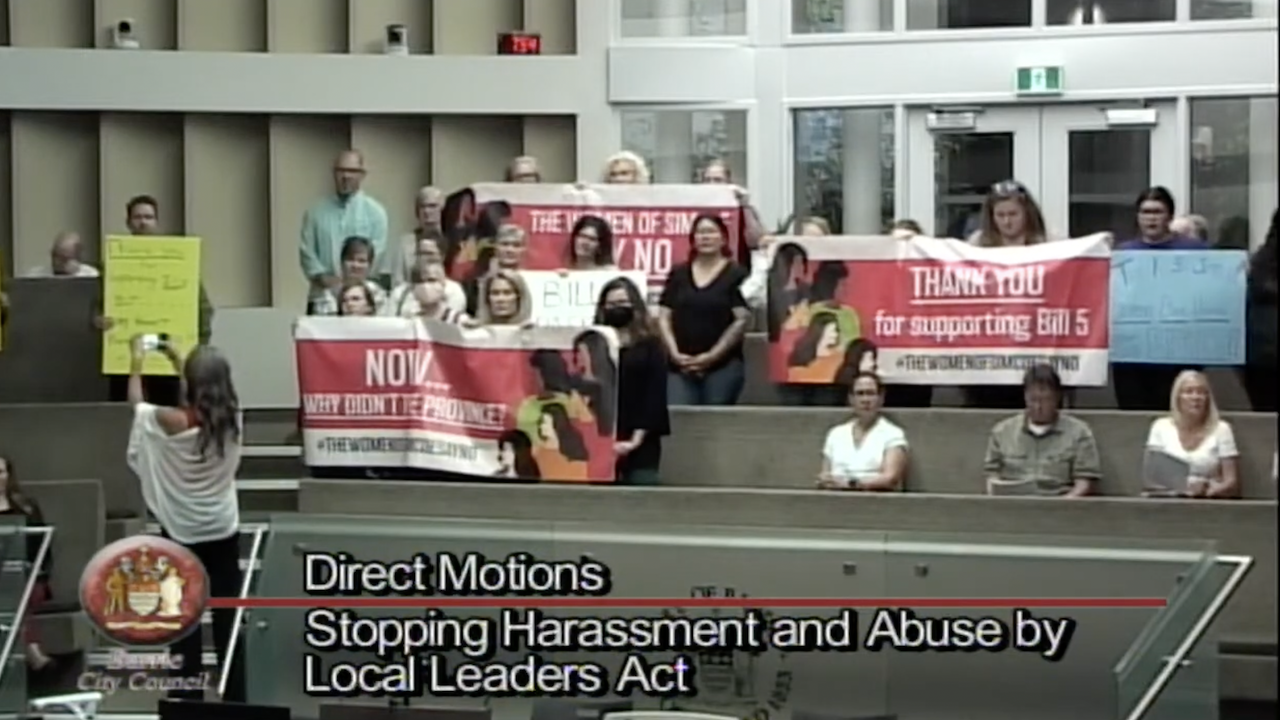 It was Jeff Lehman’s last council as mayor of Barrie. Following items and motions were discussed and voted on during the meeting.

In the Council Chambers, Mayor Jeff Lehman accepted a donation from John and Janine Ditz of I Have Resolve Foundation for an accessible wheelchair swing for a city’s public park. During the pandemic, over 50 gamers played online games for 18 hours straight to raise money.

The swing will help children like Finley Rimmer to play in the park like all his friends. “We’re so excited to see this happen. And, you know, we’ve driven by the park a bunch of times already to see the construction already happening,” said Finley’s mother Laurie, her husband Mark also joined them through video conferencing. “Our little guy Finley here is very excited.”

Ditzs started the foundation after the loss of their son from muscular dystrophy (MD). “We thought at the time, we can’t do anything about the physical disease of MD, but we could do something about inclusion and friendship and promoting awareness,” said Janine Ditz.

Barrie Bombers Under 15 Girls team won the Ontario Lacrosse Association’s Provincial A box lacrosse championship, becoming the first girls’ lacrosse team from Simcoe County ever to win in a level provincial championship and only the second Barrie team in 100 years to win it. Coach Jim Lowe and three players received congratulatory certificates from Lehman on behalf of their team members.

During the last city council meeting, outgoing Clr. Natalie Harris presented a motion in support of Bill 5. Bill 5 is officially known as Stopping Harassment and Abuse by Local Leaders Act. The act would create a process for municipal councillors to remove councillors who violate workplace violence and harassment policies. The motion, which was passed unanimously, will reissue a letter of support endorsing Bill 5. The city would send letters to local MPPs and MPP Stephen Blais who introduced the bill, Premier Doug Ford, Minister of Municipal Affairs and Housing, and the Association of Municipalities of Ontario.

The director of economic and creative development Stephanie Schlichter and the manager of strategic initiatives Jennifer Roberts presented an update on Invest Barrie.

The purpose of Invest Barrie is to secure employment, grow the tax base and ensure a community that is welcomed to all.

The report indicated that despite the recent decrease in home prices, housing affordability is still a challenge in Barrie because residents have less disposable income.

Businesses are still reeling from pandemic due to challenges related to supply chain, labour shortages, inflation and heavy investment made to stay afloat during the pandemic.

As the pandemic is mostly behind us, the city is working on a land strategy to attract more businesses to the city.

And despite talk about future recession, the city’s economy is expected to grow in this and next year.

Please follow the time stamps in the YouTube video description to jump to the relevant section of the meeting.