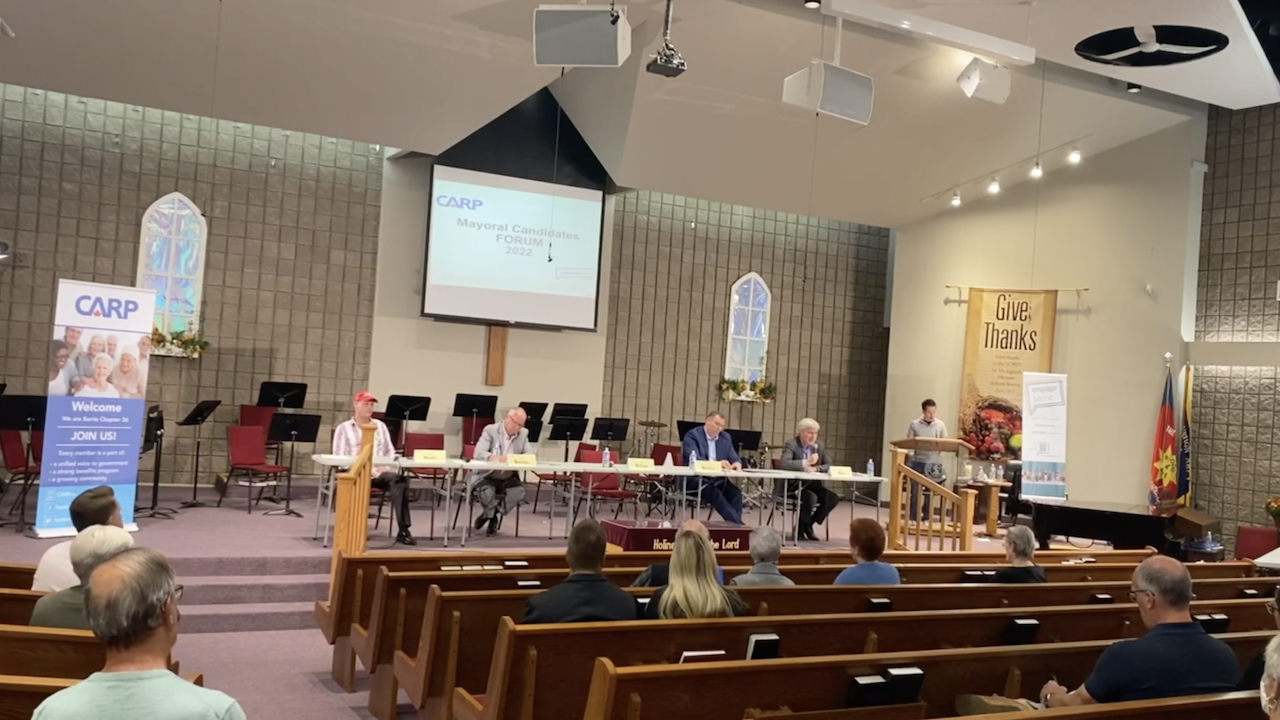 After 12 years of Jeff Lehman’s tenure, Barrie will elect a new mayor on Oct 24. Last Sunday, four mayoral candidates faced each other for the first time in a debate organized by Barrie CARP – Chapter 36 and Engage Barrie Organization. It was held in person at the Salvation Army Barrie Citadel.

Weldon Hachey, seems to be the only candidate with no prior political experience, is in the sheet metal business. Gerry Marshall served as the mayor of Penetanguishene, a small town of 9,000 people north of Barrie. He was also Simcoe County Warden. Alex Nuttall is a former Barrie city council member and Member of Parliament for Barrie—Springwater—Oro-Medonte. And Barry Ward is the Ward 4 councillor and deputy mayor of Barrie.

Housing prices in Barrie more than doubled in the past decade and rents are among the highest in Canada. Marshal said the provincial municipal and federal buildings arel one or two storeys tall and there is a need to add more floors “to create more housing stock.”

Hachey suggested caution when it comes to adding more floors to the existing buildings and suggested tiny homes as a solution to the crisis.

Nuttall said the city needs “homeownership to rental to transitional housing, supportive housing, and emergency shelters” to deal with the housing crisis. “I will work to remove barriers and roadblocks for affordable developments,” he said.

Ward detailed the work done so far such as allowing housing as a right on institutional zoned lands. He said the feasibility studies on housing projects received serious interest already and proposals are in the works to build “seniors housing, which is much needed.”

Barrie’s population is expected to double in the next 20 years. To address the needs of the growing and diverse city, Marshal said the City needs to set short, medium and long term goals for infrastructure development.

Weldon suggested eliminating all but only a few parking spaces in the downtown area and shuttle tourists in.

Continuing the focus on initiatives taken over the last few years, Ward said the City has created advisory groups like the anti-racism task force and seniors advisory committee to understand opinions of diverse groups.

Barrie is witnessing a drug crisis due to housing affordability and mental illness. Nuttall, who as a MP opposed the safe injection site in Barrie, continued to oppose it. “I really think that we need to invest in both rehabilitation, ensuring that there is availability of detox and other services,” he said.

Marshall is supportive of the safe injection sites and also wants to address citizen’s concern in having those sites in their neighbourhoods. “I want the government to answer their (residents) questions before that site opens. What are the hours of operation? How do you protect the children? What will happen to a resident who’s injected at that site after the injection?”

Ward and his colleagues at the city council unanimously approved the only supervised consumption site at 11 Innisfil Street in Ward 2 earlier this year. The proposal is with the province of Ontario for approval. After that the federal government needs to provide the green light.

“I leave those kinds of decisions to the experts and the experts say it’s part of it’s one of the pillars in a multi prong approach to dealing with the opioid crisis,” Ward said. “The sooner we get it up the sooner someone’s life in Barrie we will be saving.”