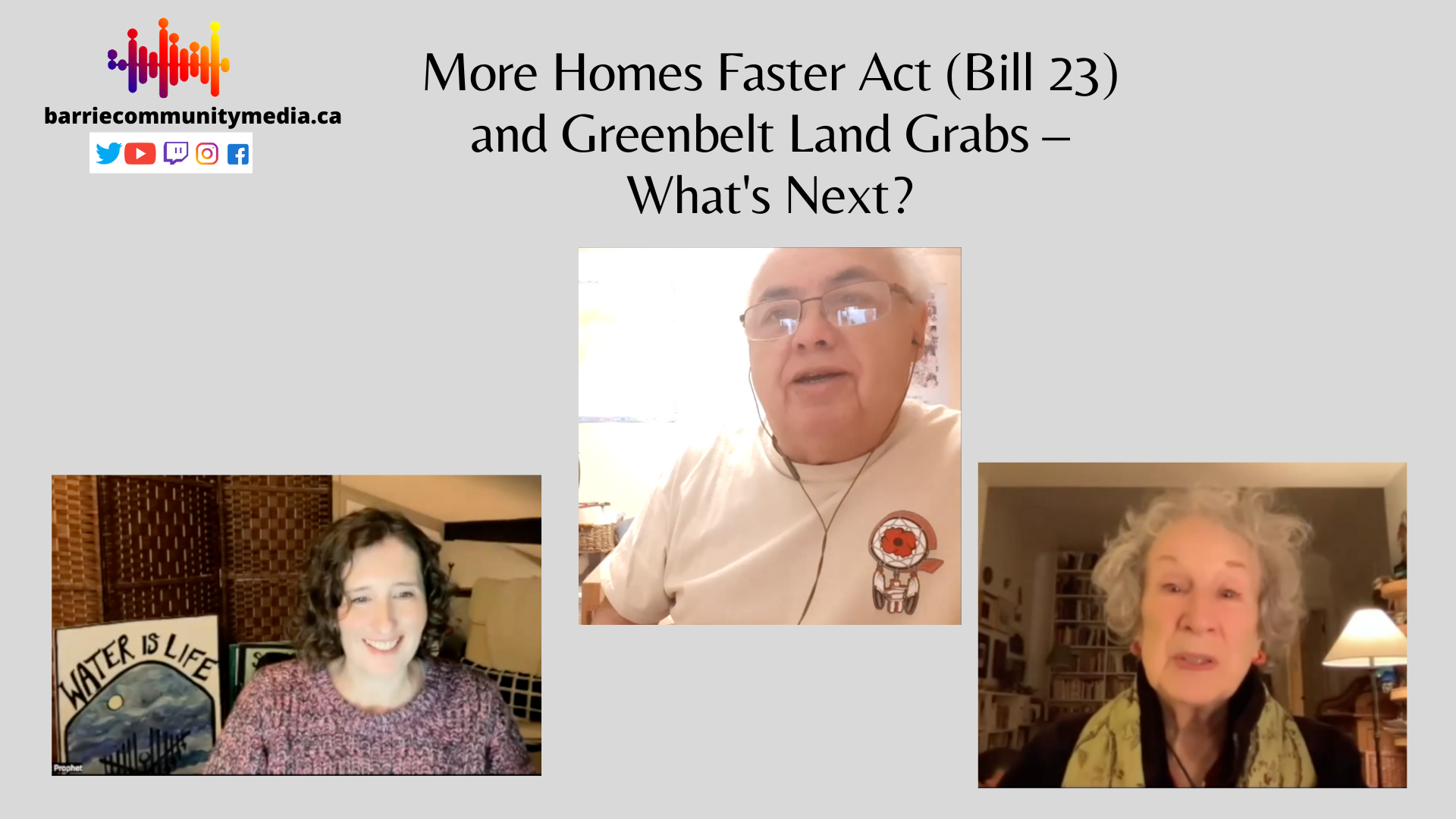 Despite huge opposition from environmental advocates, mayors and people at large, the Ontario government passed Bill 23, officially known as More Homes Faster Act. Housing advocates say it will do little to help the housing crisis but damage the greenbelt and destroy the environment.

However the bill has been passed. So what is next for environmental activists and environmental advocacy in Ontario? Last month, Executive Director of The Simcoe County Greenbelt Coalition Margaret Prophet hosted a regional meeting last month to give directions to continue the fight for the environment. She was also joined by poet Margaret Atwood, Elder Jeff Monague and other activists.

Prophet acknowledged the importance of recognizing indigenous efforts in the local battles that were won, especially . “Sometimes we forget that,” she said. “It was the persistent, consistent action that really changed.”

“The occupation of Spring Water Park by indigenous women and the collaboration between farmers, residents, and indigenous people for the battle to save Dump Site 41,” she said. “Anybody who goes enjoys spring water park know that, that a lot of that is due to the consistent and perseverant efforts of indigenous people.”

Atwood, whose “family has been in Simcoe County for a long time,” talked about overdevelopment and depleting the water table. “When you vote for somebody you want to know what you’re voting for,” Atwood said. She said the government lied that it won’t touch the greenbelt. “Then just sort of very contemptuous ‘Hahaha, yes, we are.”

She expressed her frustration with the current situation and lack of transparency. The Green Party asked for an investigation into whether members of the government tipped off developers before this bill was announced. “We would certainly like to know the answer to that, because that would be called corruption,” she said.

Elder Monague talked about the importance of protecting Indigenous land and rights in Canada. The fight for protecting land rights has been a long standing battle for the Indigenous community in Canada. “These are fights that we continue to have time after time, government after government. And it’s largely because people are not educated on these things,” he said.

He said despite the laws and treaties that are supposed to protect Indigenous rights and environment, it has been difficult to get the larger society to understand and respect the value of these lands to the Indigenous people.

Monague suggested a broad partnership “with people that are interested in preserving the natural state of what we have left.”

At the end, Margaret Prophet presented the action plan to continue the fight to protect the environment. Prophet asked participants to prepare for a long battle.

“I think sometimes we get used to activism where it feels like there’s a silver bullet. If you just did this one thing then everything would change. It would be better and I think we expect immediate results,” she said.

She highlighted two things to get the desired result -” intense action to kind of draw attention” and “sustainable set of actions.” She warned about the burnout faced by activists and said that “me showing up at 25% Every day is a lot better than me showing up at 100 per cent one day and 0 per cent for the next five or 10.”

She urged people to talk to MPPs, call, email, and visit them. Raise issues on social media. Attend events, Talk to people. Sign a petition. Volunteer. Donate. She urged them not to give up and keep fighting.