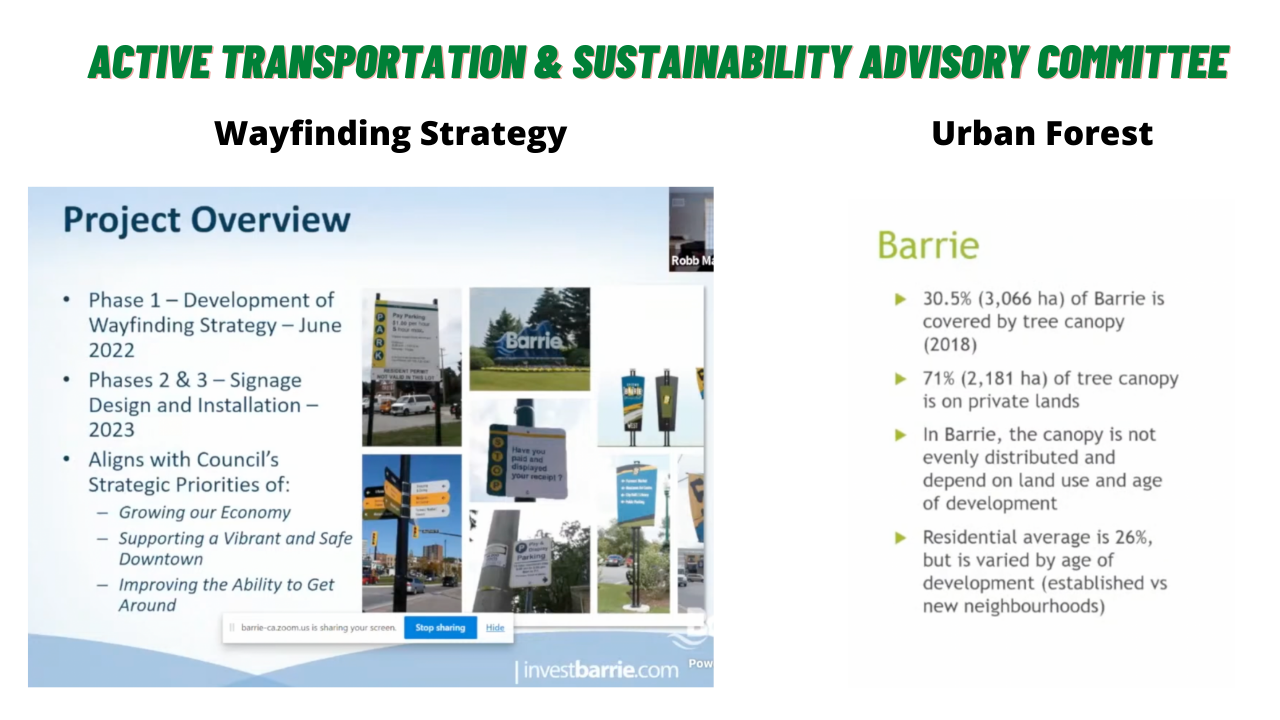 On February 28, the Intergovernmental Panel on Climate Change (IPCC) released a report underlying the importance of sustainable development focusing on climate change. Robb MacDonald, city’s tourism development coordinator, during the March meeting asked the Active Transportation & Sustainability advisory committee “to reset its mind to what the City of Barrie can do in sustainability.” He also wants the committee to bring “a certain number of proposals to council to consider in certain areas” including “active transportation” and “sustainability.”

MacDonald also presented the city’s wayfinding strategy. Cygnus Design Group started working on phase one of the project this January. During this phase the strategy will be finalized. Phases two and three, starting next year, will see the installation of signs. MacDonald said “main goals and objectives are to direct residents and tourists to downtown Barrie, and the attractions within, from key travel decision points. So particularly along the 400 and major arteries into downtown.”

He is also expecting “signage to help pull waterfront users to the downtown for shopping and dining, to orient people within the waterfront and the downtown areas so they know where they’re going and provide direction to available parking.”

Councillor Keenan Alywin, who is also the chair of the committee, said that wayfinding strategy is also “an opportunity to actually encourage and highlight modes of transportation other than personal vehicles. I think it’s a powerful tool.”

Cecil Konijnendijk van den Bosch, professor of urban forestry and program director, Master of Urban Forestry Leadership at University of British Columbia – Vancouver, invented a rule to increase urban forest. It is called a 3-30-300 rule. Andee Pelan, executive director at Living Green Barrie, presented it “through a lens of equity and making sure that everyone regardless of where they live in Barrie has access to quality green space.” The first rule is that every citizen should be able to see at least three decent size three from their homes.

The second rule states that 30 per cent tree canopy cover in every neighbourhood. To ensure proximity and easy access to green space, the World Health Organization recommends a maximum distance of 300 metres to the nearest green space. A safe 5 to 10 minute walk.

A little over 30 per cent of Barrie is covered by tree canopy. However it is not even distributed and  71 per cent is on private lands.

She concluded that “even with a big effort it is going to take a lot of time and even bigger effort before we actually see the true benefits of any enhanced planting program. I think the importance of protecting the older trees can’t be overstated.”

Councillor Ann-Marie Kungl wants to bring a motion to the Council with “a focus on tree planting that is reasonable” by using available “funding to support beautification across the wards.”

Homelessness, not a choice or personal failing, can be caused by even missing a week’s work, expert says