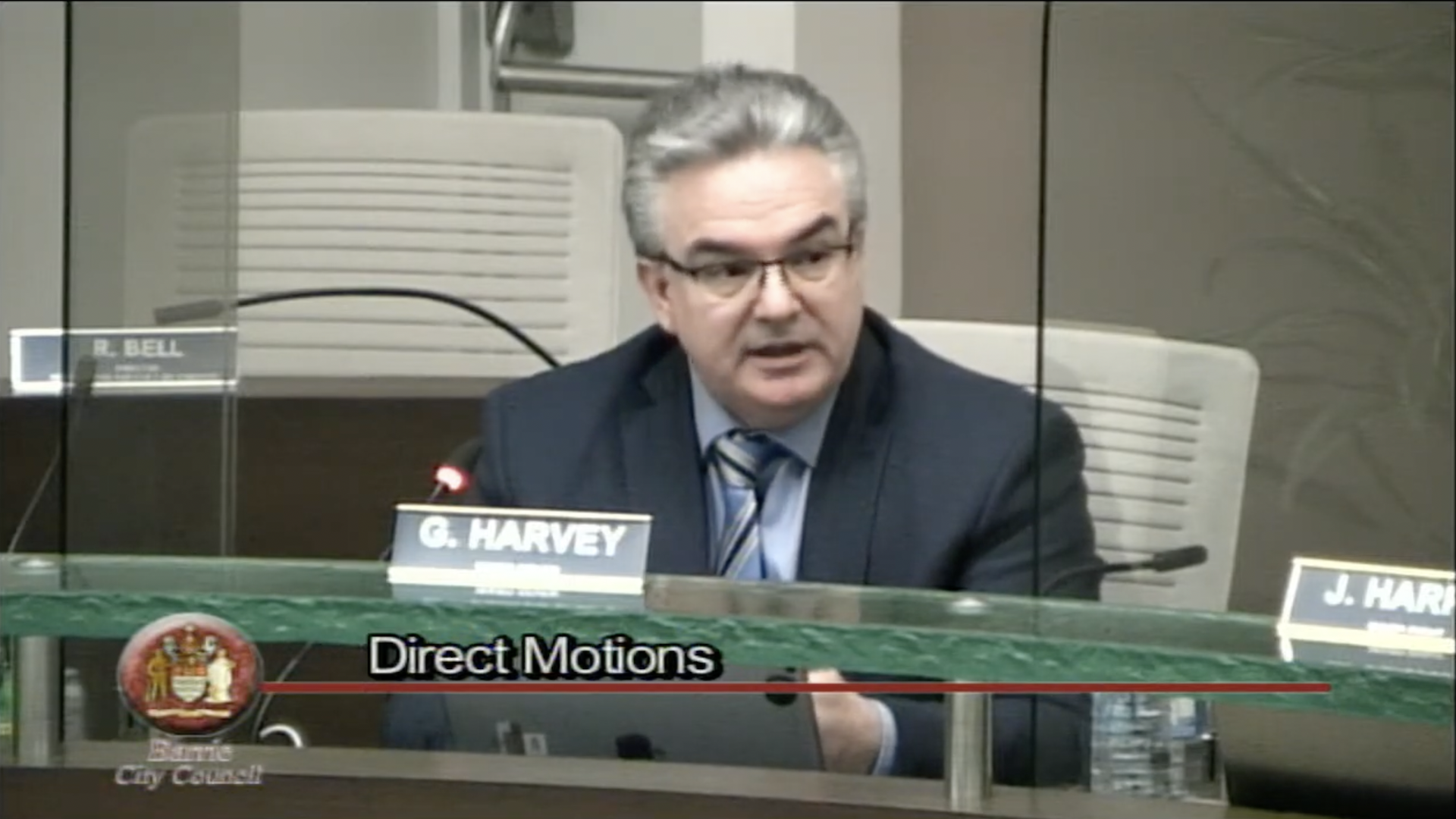 It was the second consecutive week and third motion since Mayor Lehman went on the unpaid leave that the movers of motions were not able to provide necessary information and background about their motions.

During the city council meeting on Monday, Ward 7 councillor Gary Harvey put forward a motion to “adopt a procedure where as members of council who are on unpaid leave of absence be required to one return all electronic devices and computers that are the property of the City of Barrie within 48 hours of the commencement of their leave until they return from their unpaid leave to have their email suspended.” The motion also proposed “to have their building access card suspended” and “be relieved of all their duties and responsibilities.” In case of non-compliance, “the chief administrative officer or the clerk to notify members of council as soon as possible.”

If passed this motion would have been applied to Mayor Jeff Lehman who is on unpaid leave of absence as he is running for MPP.

Councillor Ann-Marie Kungl of Ward 3 was first to speak out against the motion.

“My understanding is that as an elected official, even if we’re on leave, we’re not necessarily excused from counsel,” she said. “I guess if there was a concern, you’d be using the tools at hand, be it integrity commissioner, filing should there be an issue with misuse of technology, or access.”

Keenan Aylwin, Ward 2 councillor, expressed his strong opposition and disappointment with the motion.

“I can’t help feel like this is a partisan motion. And I think it’s unfortunate that it’s before Council this evening,” he said. “I think there are more pressing issues that council has to deal with.”

Ward 10 councillor Mike McCann was one of the three councillors who showed support for the motion.

“I think that with recent, you know, newspaper articles that information has, you know, came from this office to there. I think tightening up the procedures is probably a good thing,” he said.

He was interrupted by Kungl that “I don’t see how that’s applying to necessarily use of technology and staff policy or council policy. Maybe just to clarify, but I’m not sure if that’s off topic.”

Ward said he was in touch with former councillor Doug Shipley when took the leave of absence to run for federal office. Cooke also mentioned that Shipley’s did not lose access to technology.

Things turned against the motion when Cooke clarified that Natalie Harris, the seconder of the motion did not have any restrictions put on her when she took the leave of absence last year.

“We’ve had members in this term that didn’t, you know, have to return their devices,” referring to Natalie Harris, Robert Thomson, Ward 5 councillor said.

Immediately after Harvey withdrew the motion.

“Given the new information that I’ve just learned that I wasn’t aware of, I will withdraw my motion,” he said.

“We weren’t aware of that before,” said Natalie Harris as she agreed with Harvey’s decision to withdraw the motion.