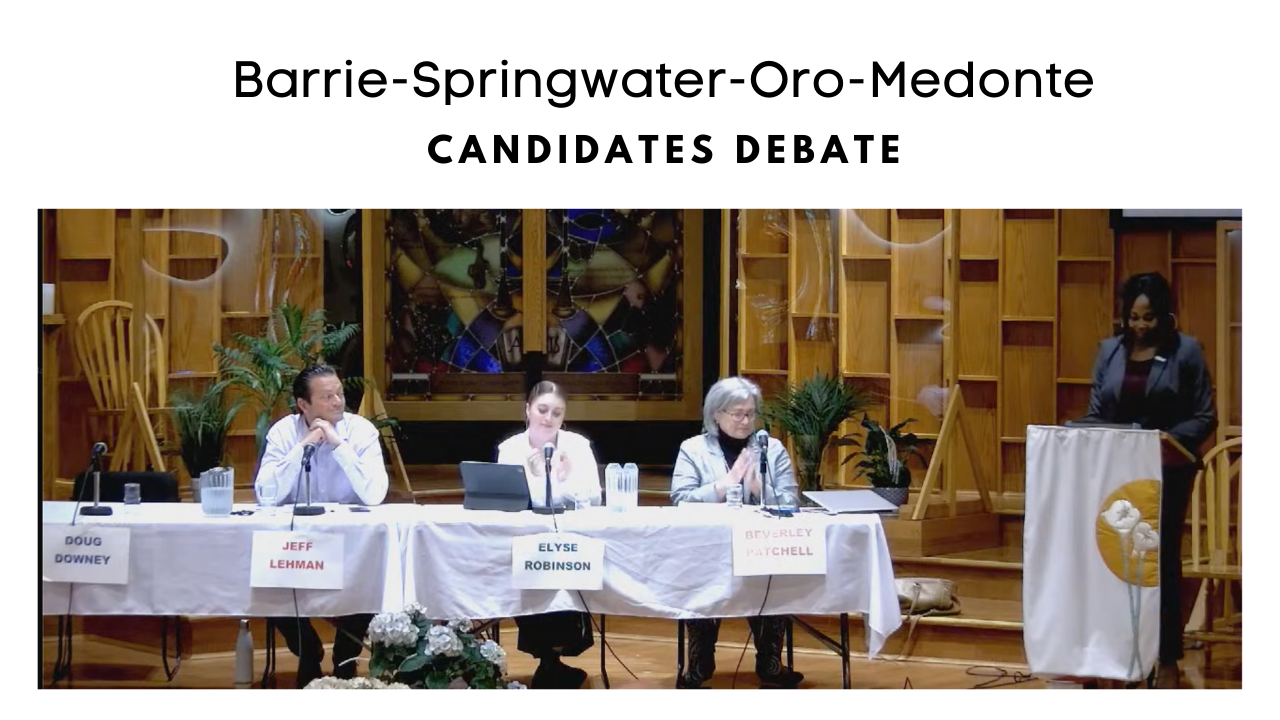 Downey’s campaign told BarrieToday that due busy schedule he was not able to attend the first debate but plans to participate in the upcoming Barrie Chamber of Commerce and Canadian Association of Retired Persons (CARP) all-candidates meetings later this month.

The Doug Ford government cancelled the planned 2019 minimum wage increase by the previous Liberal government. However, it reversed the course earlier this year to increase it to $15 per hour.

All three candidates support an increase in the minimum wage however their approach differs.

Lehman said Liberals will increase it to $16 and “to bring in a living wage, which is regionally based.” So the living wage in Toronto is expected to be higher than it is in Barrie. Robinson promised a continuous increase in the minimum wage to reflect the actual cost of living. NDP plans to immediately increase the wage to $16 and to $20 by mid 2026. “We’ll work with stakeholders to determine how best to index the minimum wage after that to ensure that it maintains its purchasing value,” NDP candidate Patchell said.

NDP pledges 20 per cent increase for both programs and indexing rate increase to inflation. Greens want to double the rates while Liberal would increase OW rates by 10 percent and 20 per cent for ODSP. In addition Liberals promise basic income pilot and 10 paid sick leaves.

Since the start of the pandemic, home prices in Ontario have skyrocketed, increasing homeslessness. To address the housing crisis, Lehman said Liberals would start the homeslessness census that had been cancelled by the Progressive Conservative government of Doug Ford and build 238,000 deeply affordable homes including 38,000 units of supportive housing. Lehman wants to take provincial the housing model that he campaigned as a mayor by converting bars and motels into supporting housing with the help of local non-profits such as Redwood Park and David Busby Street Center.

Greens, Robinson said pledge to build 60,000 supportive housing units by creating partnerships with public, private and nonprofit housing organizations. Patchell of NDP said that it plans to build 69,000 new and affordable homes, extend the life of 260,000 affordable homes, and help 311,000 People households pay the rent by the creation of a portable housing benefit.

There are a number of proposed highways including the Bradford bypass, 413, and 404 extension around Lake Simcoe that according to scientists predict could have toxic levels of salt in the lake within 40 years. To permit Bradford bypass, the provincial government relied on a 20 year old environmental assessment that predates the Lake Simcoe protection plan and the Paris Climate Accords of 2015.

Patchell said the NDP would cancel the highways and invest more than $10 billion in freed up capital to make life more affordable for Ontarians. Robinson said in addition to cancelling the highways her party will make it illegal to build any new highways through the Greenbelt. Lehman’s party would cancel highway 413 but propose a new environmental assessment process for Bradford bypass.