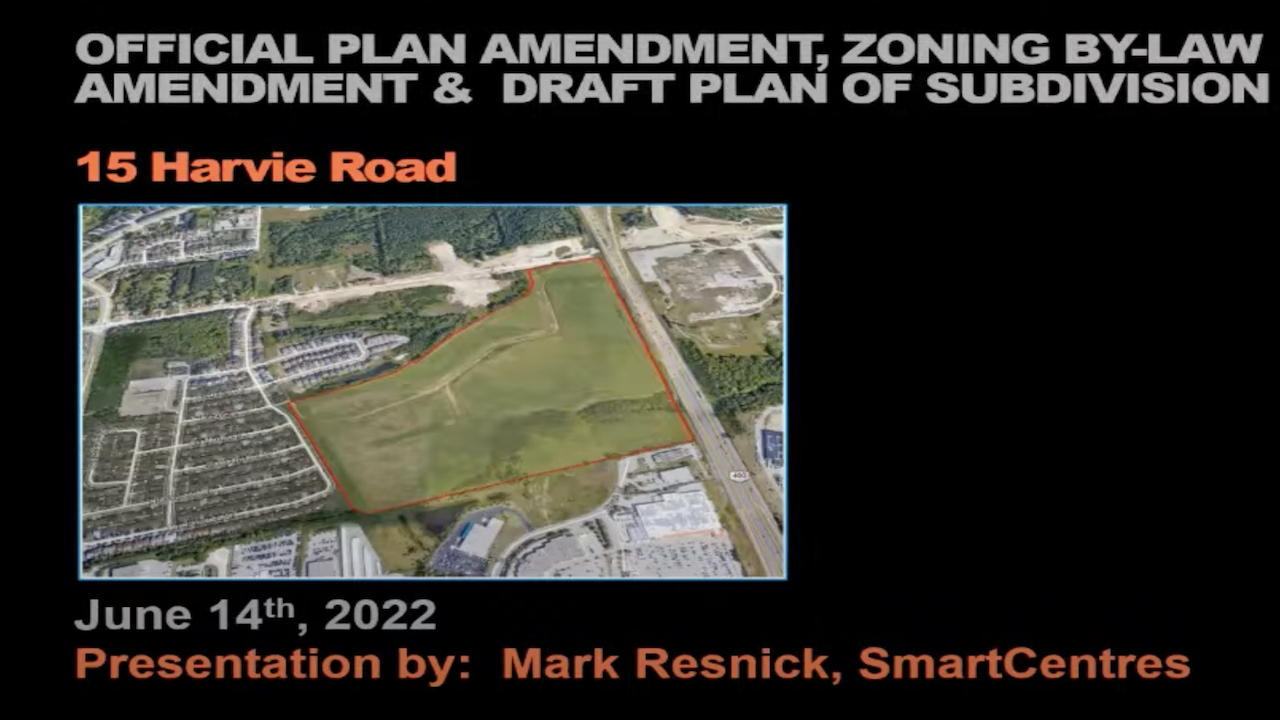 Amid rising interest rates and slowing housing market, a number of new big and small residential and commercial developments are proposed in Barrie. These are the highlights from this week’s planning committee meeting.

SmartCentres, with 174 properties across Canada and $11.7 billion in assets, is proposing to transform a 33.26 hectare active farm on 15 Harvie Road into a mixed residential and commercial property.

The proposed site is near highway 400 and surrounded by industrial units on the east, commercial on the south and residential on the north and west. The future development will split the property in the middle by the future Brian drive, which will be dedicated to the city.

On the east of the lot 248 low rise units and two mid rise blocks are proposed with a density of 60 units per hectare. While on the west side, one to two storey commercial buildings, open space and storm water block.

The developer is addressing residents’ concerns about the park raised during the January neighborhood meeting. It was attended by 47 residents and the Ward 7 councillor Gary Harvey. Residents also had serious concerns about potential increase in traffic and capacity of local schools due to the addition of hundreds of residents and businesses in the area. The Simcoe County District School Board has agreed to a school site on the property to accommodate new families needs.

The construction is scheduled to be completed by 2024.

Bayfield street on the south of highway 400 continues to see a rise in new developments.

233 Bayfield is currently zoned commercial, while 219 Bayfield is zoned residential as per the city’s zoning bylaw.

The developer is seeking to rezone the entire land to build a real estate office. City’s planning staff are currently completing the technical review process for this rezoning application.

A 21 storey mixed use building is proposed on the properties located at 17 Sophia street, 3,5, 7 and 11 MacDonald Street, and 58 and 60 Clapperton Street in the city centre. The building will house more than 250 residential units consisting of one bedroom, two bedrooms and three bedroom units ranging in size from 650 to 700 square foot.

There would be 216 parking spaces, which will be located underground and at a ratio of 0.85 spaces per unit.

Western Consulting Group presented the plan on behalf of the Black Creek Group.

Councillor Keenan Aylwin asked about the developer’s plan to have at least 10 per cent of affordable units in the building. “There are no fordable housing units proposed for the development that would be falling under the definition of affordable under the official Plan,” Michael Vani of Western Consulting Group responded. He cited “drastic changes in the housing market” due to rising “interest rates” as a reason for it.

He would take the issue back to the client and “look at different opportunities to potentially increase affordable housing on the site.”