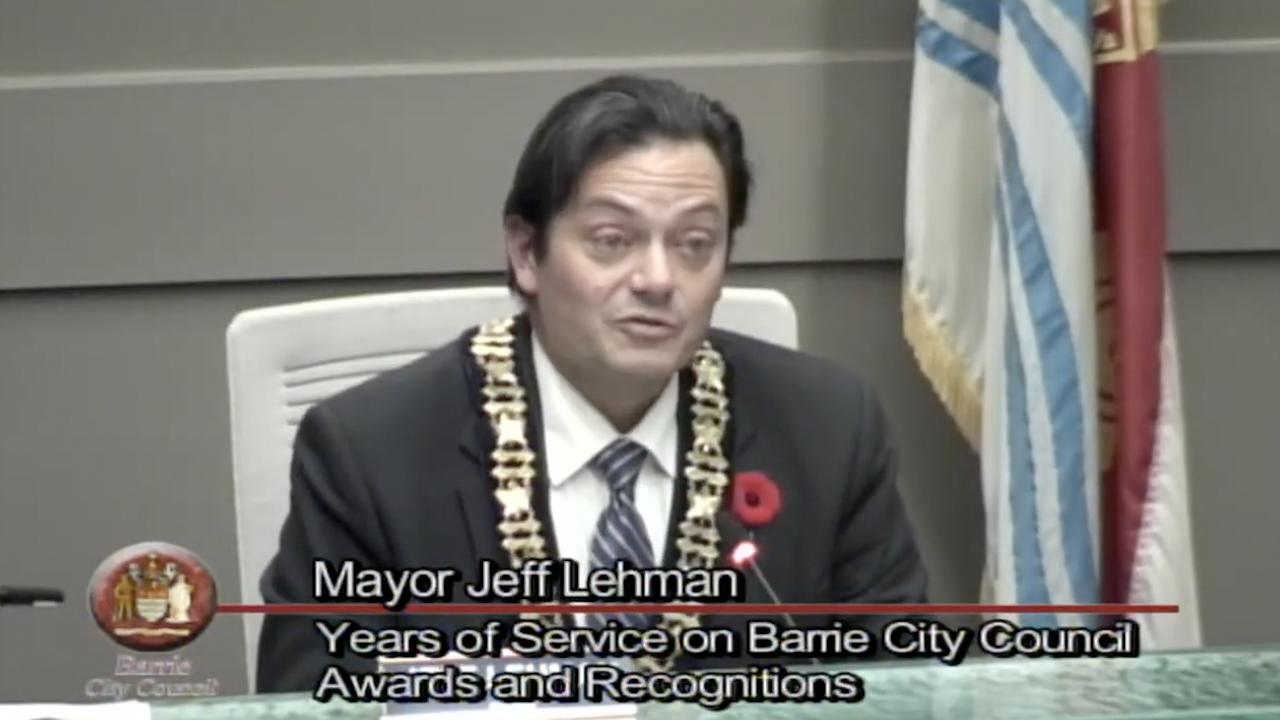 Lehman recognized four councillors with a momento. He praised Ward 2 councillor Keenan Aylwin for his commitment to progressive causes. During his one term, Aylwin, was a member of Barrie Public Library board and City Building Committee. He was also a chair of the city’s Active Transportation and Sustainability Committee. In his speech Aylwin said he is not sure yet about his future plans. But he said he will “always be a part of that struggle for justice, standing side by side with people who believe that we can create a better future where everyone can live a life of dignity.”

Talking about Ward 6 councillor Natalie Harris, Lehman appreciated her work in supporting people in their battle against addiction, their battle with mental health and their battle against homelessness. Harris, a one term councillor, worked on several committees including City Building and Community and Safety and Wellbeing. Harris said she is proud of the work she had done at the council. “I can assure you my work in the city isn’t done. I will still be working behind the scenes.”

Councillor Mike McCain was the Ward 10 councillor from 2014 to 2022 and was a member of Tourism Barrie among others. “If you’re only gonna remember one thing about Mike McCann, love more, hate less, and I’ll see in four years.” It wasn’t clear if he will run as a councillor or mayor, as he did in the October 24 election.

Lehman had special praise for Barry Ward who was the Ward 2 councillor for 22 years. “His contributions are manifold,” Lehman said about Ward. Ward served on the Simcoe Muskoka District Health Unit, Finance and Corporate Services Committee, Sunnydale Park Master Plan steering committee and many more.

When it was his turn, Deputy Mayor Ward became emotional when he shared a picture of him with his sons taken on his first day as a councillor 22 years back. Ward called his tenure as “the world’s greatest part time job” and thanked Ward 4 residents for voting for him. He also thanked city staff and his family: wife, Marge and sons Oliver and Julian. Julian, who was in Ottawa for school, could be present.

“You’re fighting for the same thing, you’re fighting to make Barrie a better place so you might have disagreements, but you work on a compromise and keep looking forward,” he said to the upcoming council members.

At the end Mayor Jeff Lehman delivered his farewell speech. Before that, Ward recognized Lehman’s various achievements over the years. He served Barrie’s mayor for 12 years and before that as a councillor. Lehman was a founding member of Alectra Utilities, the second largest community owned utility in North America. He served as the chair of Ontario’s Big City Mayors. Ward said Lehman “established a new level in the city’s relationship with the First Nations at First Nations and indigenous people whose traditional lands and territory Barry is on.”

Lehman, at the beginning of the speech, thanked the people of Barrie, for “ your confidence in the honor of serving you.” Over his three terms, Lehman served with 26 council members. “We certainly had our share of adversity both at times around this table,” he said to the outgoing council members. “But with a pandemic, with a tornado, with the challenges of the opioid crisis, mental health, homelessness in our community, and yet, we managed to accomplish a great deal. And I really do appreciate that there were members of this council that stepped up when it was needed.”

Lehman’s parents, partner and daughter were in the audience for his last meeting. “My dad led the downtown BIA, my mom built our art gallery,” he said. “I would not have been able to take a single step in public life without them.” He thanked his partner Carolina and her three daughters. “To Carolina, you believed in me, and what I do. And you’ve supported me relentlessly, even when that came at something of a cost.” Toward the end, he thanks his daughter Logan, who was 18 months old when Lehman became a mayor. “I’ve seen your empathy, your smarts and your sense of humor all grow. And I know it’s all been worth it. Thank you, Logan.”

At the end, he warned the council against social media that has an inappropriate amount of influence on people. “These sort of online echo chambers that we live in are driving polarization on a level that is the biggest threat to collective action we’ve ever seen,” he said.

“The antidote to that polarization and the isolation that feeds it, is connection. And we hear in municipal government, in our community, nobody has more direct ability to build connection among human beings than we in local government.”

As winter nears, the city of Barrie has intensified its campaign against the homeless