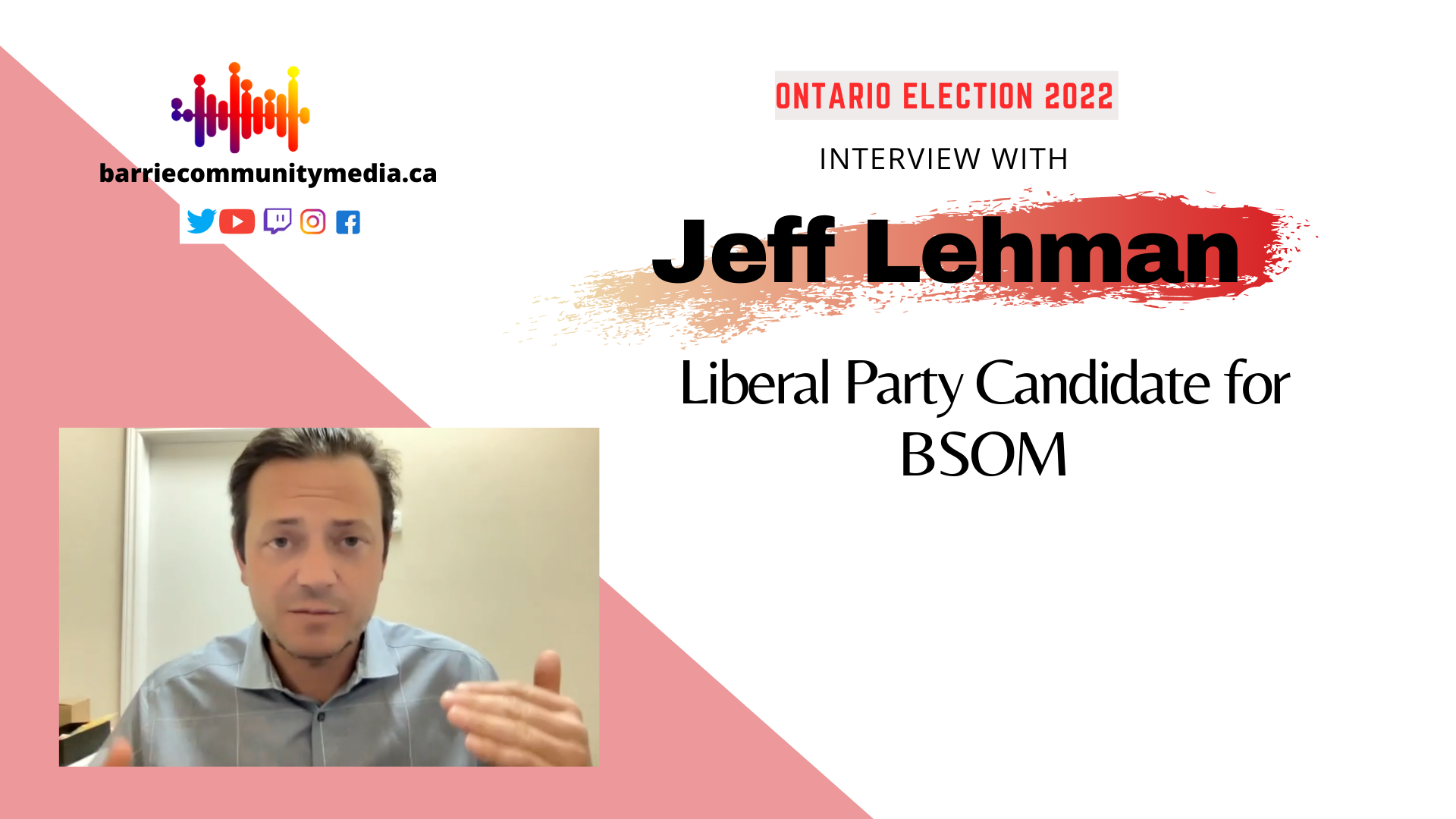 Deepak Bidwai of Barrie Community Media sat down with Jeff Lehman, Liberal candidate for Barrie–Springwater–Oro-Medonte (BSOM) in the June 2 provincial election, to know if he misses being Barrie’s mayor, whether he is concerned about the city’s future, how his campaign is going and his party’s platform.

Lehman announced in late February his plans to run against incumbent MPP and Ontario Attorney Journal Doug Downey. Since late March he has been on unpaid leave of absence to run his campaign.

Lehman said he misses working “with the people in the community” during his more than ten years as the mayor. “I do miss the community events.”

Lehman said he is not concerned about the future of the city because of sustainable “organizations and systems” he helped build. He gives an example of culture funding “that happens independent of the political world, which is a good thing. It’s not good for politicians to be picking and choosing grant recipients.”

Lehman said “it’s nice to be the underdog again” but he chose to run in BSOM riding because he “represented this part of the city” as the Ward 2 councillor from 2006 to 2010.

The ubiquitousness of Lehman’s lawn signs are almost impossible to miss. He said some members of his campaign team are from his 2006 campaign and “top three canvassers are all under 25 years old.”

To solve the affordability problem Liberals are proposing “the Ontario Housing Corporation to start building housing,” an European model. To help ward off the impact of high oil prices, his party is “proposing a $9,500 rebate on the purchase of electric vehicles to help people make that switch.” He said $1 transit fares would also help people fight inflation and help the climate crisis too.

The challenges faced by migrant workers on farms, Lehman’s party is proposing the worker package benefit to offer healthcare including mental health benefits.

Lehman said he doesn’t have an answer for putting a cap on fees charged to international students to avoid their exploitation.

After coming to power, Doug Ford’s government started singing God Save the Queen at Queen’s Park. Many Indigenous MPPs protested the move as colonial. Lehman said he doesn’t have an answer to the party’s position on stopping signing the anthem but his party will re-appoint Indigenous ministry, which was eliminated by Ford.

“We also really believe in investing in curriculum, indigenous written and prepared curriculum for the public education system, and also libraries. This is something specific that was in our platform, because we want to provide support for learning of indigenous tradition in histories, pre colonization,” he said. “So we’re talking about the entire history of this province, when we’re educating our students.”